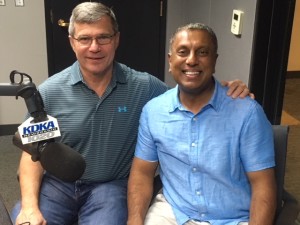 When you read the headlines in 2018 about significant mergers (and potential mergers) in the world of business, you’re no doubt reading about the biggest names in industry, be it Disney/Fox, Sirius/Pandora, AT&T/Time Warner and others.

That said, in our region, there is none larger than the headline about one that happened just a few months ago, between two hallmark companies to create a global leader for rail equipment, services and software.  An $11 Billion merger that will not only keep an industry titan home in Western Pennsylvania, but will provide the infrastructure for the resulting firm to grow and prosper, benefiting the region for decades to come

And Ray Betler was keenly aware of this headline.  In fact, he oversaw it.

As President and CEO of Wabtec, Ray engineered the transportation firm’s recent merger with GE Transportation, ascending the company to Fortune 500 status and further cementing the Wilmerding-based company’s legacy here in Western Pennsylvania.  And it’s a legacy that is not lost on Ray one bit, as he follows the footsteps of not only George Westinghouse (founder of the eponymous company that would become Wabtec), but now Thomas Edison as well.

And while being the leader of this company is important to Ray, it’s what he does WITH that leadership that matters more.  An ardent student of the philosophy of “servant leadership”, Ray is devoted to sharing the power, and putting the needs of his constituents first and foremost.  It’s a philosophy that has served him well throughout his career, and one that stands out even among the most exceptional of CEOs in a variety of industries.

On this edition of “The Raja Show”, Ray joins another successful CEO who believes in the philosophy of servant leadership as he is the in-studio guest.  Ray and Raja discuss the inside story of the recent merger, what it means for the employees of the company, and the region as a whole, as well as Ray’s belief in what makes a leader truly effective.

You can hear the episode in its entirety here.