On Saturday, September 1,  “The Raja Show” returned to the airwaves, bringing more of the great discussion on business, education and leadership that have served the region for years, and continuing the commitment to present the most insightful, topical, and thought-provoking discussion with the foremost leaders in the region, and the country. 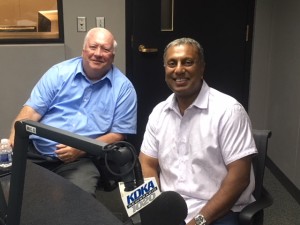 And when it comes to serving the Western Pennsylvania region, few, if any, have the pedigree in doing just that as Raja’s inaugural guest this Saturday, Bob Brooks.  From his role as longtime CFO of Westinghouse Air Brake Technological Company (Wabtec), to his 26-year term of service in the town of Murrysville, first as Councilman, then as Mayor (for which he was named Pennsylvania’s “Mayor of the Year” in 2015) to his critical role as part of the ownership group that kept both the Penguins and Pirates in town, Bob, much like Raja, has seen the potential for the region, and has worked exhaustively to help see that potential through to fruition.

On this episode, Bob talks with Raja about his story, expresses the importance of keeping young people involved and engaged in the infrastructure in a city, and reveals the things that Pittsburgh needs to do to ensure that it remains viable for generations to come.